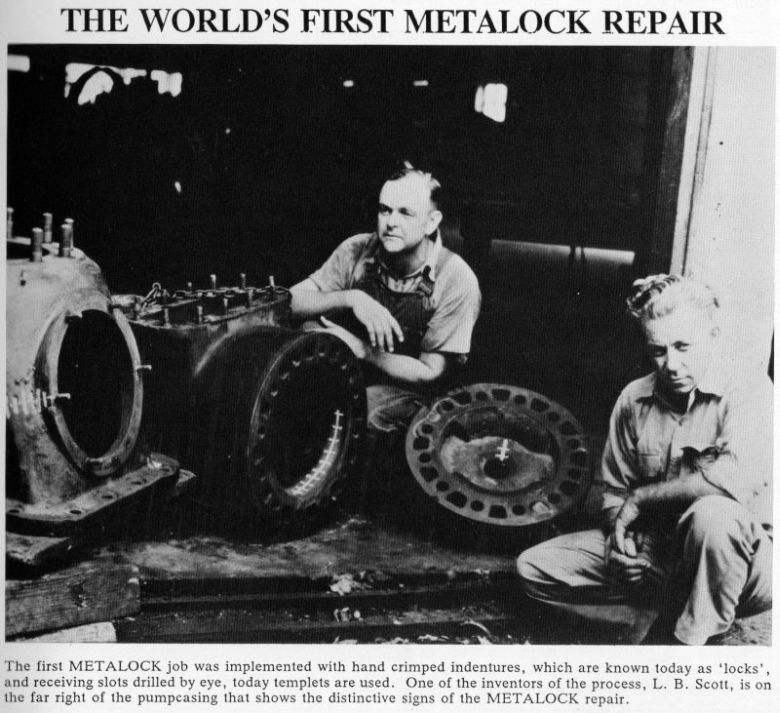 The origin of this process dates back to the 1930s, in the remote oil fields of Texas, the repair of large valuable equipment was a serious problem, not only because of the high cost of spare parts, but also because in an environment like this could be disastrous to all welding work flame. Simply, technicians had to find an alternative solution and achieved by applying the old "iron key." It was a cold repair that eliminated that danger and thus, forced by circumstances, a former engineering principle became a "new" repair process.

This process was expanded and after World War II, was released in Europe Metalock by men of great prospects realized that in that area land devastated by war, had to result in an extraordinary market. The destruction of machinery and lack of spares resulted in a success for this new repair process. This international expansion was mainly originated from the efforts of three men: a former Canadian military commander named Edward C. Peckham, David Arvidsson Swein Gulbrandsen and a Norwegian and Swedish, respectively. Peckham was Edward who first introduced the system to Britain, traveling from that country to the rest of the world, spreading the foundations of Metalock society network that exists today.

Repairs were made not only successful, but were reliable. Being a cold process, no thermal stress incorporating the component, which only resulted in a stronger repair but may also resisted soon became elevated pressures. The technicians won a great reputation for their knowledge to work. Although modern Metalock repair is largely identical today, through extensive research and knowledge gained through the numerous repairs difficult, has improved the technique and speed to provide service to the industry average warranty repair most reliable exists.